Wu Yalu Wu Yalu (吳雅璐) is the owner’s Chinese name. Chinese language chop with the family name Wu (吳) on the right in red and the personal name Yalu (雅璐) in two characters in white from top to bottom on the left. Inscription: 吳雅璐 Pinyin: wu ya lu Collection: Wu Yalu Material: white and grey […]

Sixty Years Old … Huajiatongsheng (花甲童生) means something like “sixty years old and (still) a low-level student.” A Chinese language seal with four characters alternating counter-clockwise from top right in white, red, white, and red. The stone, from China and supplied by Dr. Yang, is very soft—probably soapstone. Because it would not take a good […]

Wang Gongyi Wang Gongyi (王公懿) is the name of the chop’s owner. Chinese language chop with three characters, two in red, top to bottom, inside the outline of a white character. In other words, the family name Wang is the white background bordered by red with the personal name Gongyi as two red characters going […]

Cross Seal With Base

Yesushizhu 耶穌是主 means “Jesus is Lord.” A chop carved into the bottom of a wooden cross with a base of southern Oregon steatite and felt underneath. Clockwise with one red character on the left to two white characters on the right top to bottom. Made on commission for someone as a gift for their brother […]

Yesushizhu 耶穌是主 means “Jesus is Lord.” One of a set of three chops carved into the end of the arms of a wooden cross. Clockwise with one red character on the left to two white characters on the right top to bottom. Inscription: 耶穌是主 Pinyin: yesu shi zhu Collection: May Au Material: hardwood Size: 1.6 […] 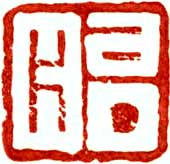 Kao English language seal with “Kao” in mixed red and white characters, from left to right and top to bottom. One of three in matching materials commissioned by Jane Kao as gifts for her children. Image is not to scale. Inscription: kao Collection: Roger Kao Material: white marble Carver’s mark: Lvke Size: 1.8 x 1.9 […] 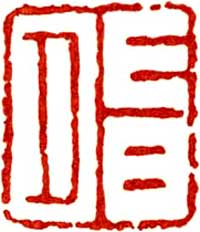 Deb English language seal with “Deb” in mixed red and white characters from left to right, top to bottom. I carved this in a very pretty piece of granite, but it wore away a carbide bit in the process. If I decide to use such a hard stone again I’ll use diamond bits instead. Image […]